Formichetti is gone and now Mugler can go back to selling REAL clothes for REAL women!!!

The London-based designer – who starts his new role in January – will unveil his first collection for the brand in June with pre, before making his catwalk debut in September during Paris Fashion Week.

“We want to write a new page for Mugler, putting it back on the map in the fashion business,” said Virginie Courtin-Clarins, director of development, marketing and communications at Mugler Fashion. “We have the potential to modernise it and I think the potential is huge.”

Koma replaces Nicola Formichetti, who left the French fashion house in April to join Diesel as artistic director. The designer’s arrival marks the first stage of re-branding for Mugler, with a renewed focus on women’s ready-to-wear. Courtin-Clarins said that Koma’s feminine body-con signature is “in the same line as the Mugler DNA, yet he has his own modern and unique vision of a woman”. 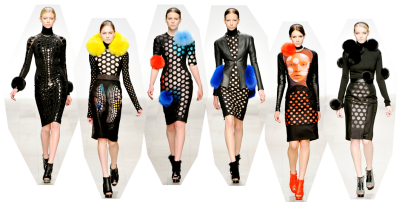 “We agreed that we wanted a real couturier,” Courtin-Clarins told WWD. “We feel we need to focus on the product, and that’s why we’re starting with the pre-collection.”

“I am deeply honoured to take up the role of artistic director at Mugler – a house for which I have the utmost admiration and respect,” Koma said. “For me, Mugler is the most extraordinary fashion house with an undeniably audacious heritage.”

Koma’s cutting edge style has been a favourite with celebrities such as Beyonce Alicia Keys and Rihanna. His futuristic designs electrify the London catwalk every fashion week.